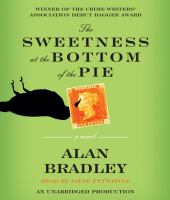 The Sweetness at the Bottom of the Pie

A lovely murder mystery set in England. Flavia de Luce is a charming young investigator and it's a delight to follow her adventures throughout the whole series.

Reminiscent of Nancy Drew and Sherlock Holmes, our heroine Flavia is both brilliant and endearing. The narrative is woven with so many details to build both the characters and the mystery. I genuinely thought a mystery involving an old stamp set in England would be musty and boring; instead, it felt like the reader is side by side with young Flavia as she is subjected to the torments of older sisters and the investigations she jumps into. Highly recommend for tweens to adults who enjoy a good detective tale.

This series is incredible and makes me smile listening to it, the audiobooks are perfect and completely hilarious. Might be my favorite series of all time.

Series recommended by Godsel. This is first featuring 11 yoa Flavia DeLuce. Challenging vocab, not sure if want to finish series.

I thoroughly enjoy Flavia. All of the book in this series make me happy.

Once I suspended my disbelief about Flavia's age because that was just ridiculous it was a fun mystery.

Funny story - I've tried reading this book, I think, 3 times before both in audio and print and could never finish it. But now I have finished it! *jazz hands* And it was really enjoyable.

I had been reading a lot of non-fiction that dealt with some heavy topics that were hitting me right in the feels and wanted something that was light but still witty and smart. This fit the bill! Flavia is such a wonderful main character to live through and she makes me wish I liked/was good at chemistry (alas, I am not, nor shall I ever be). For whatever reason, the narrator's voice didn't get on my nerves as it did before and I actually was impressed with it this time around. The narrator does a perfect voice for Flavia. And though this is classified at my library as adult mystery, I think a middle schooler who is of strong mental disposition (interpret as you will) would enjoy this and be appropriate.

Eleven-year-old Flavia de Luce is understandably surprised to discover a dying man late one night in the garden of her family's English estate. When the investigators' suspicions come to rest on her own father as murderer, she resolves to solve the mystery first. Our heroine, a wunderkind in the field of chemistry, is also charmingly plucky and exceedingly entertaining. I'll definitely read further into this series.

CORI D. MORRIS thinks this title is suitable for 10 years and over

mlabreche11 thinks this title is suitable for 12 years and over

cino1 thinks this title is suitable for All Ages

hil_elrick thinks this title is suitable for 10 years and over

Amie thinks this title is suitable for 13 years and over

Like murder mysteries? Can you compete with an amateur chemistry student who is 11 years old? Funny, unexpected murder mystery with a likeable, young heroine! Watch out - her specialty is poisons!

Flavia de Luce is an 11 yr. old chemistry whiz. She has two older sisters with whom she is at odds. Her father, a philatelist, is distant and unavailable and she is largely parented by the housekeeper and the gardener. She helps solve the murder of one of her father's school friends who is found dead in the garden.

An adult book but can be read by advanced younger readers. Main character is a young, strong female who finds herself in danger while investigating a mystery that arrived at her doorstep.

"As I stood outside Cow Lane, it occurred to me that Heaven must be a place where the library is open twenty-four hours a day, seven days a week.

"As I stood outside Cow Lane, it occurred to me that Heaven must be a place where the library is open twenty-four hours a day, seven days a week.

“I remembered a piece of sisterly advice, which Feely once gave Daffy and me:
"If ever you're accosted by a man," she'd said, "kick him in the Casanovas and run like blue blazes!"
Although it had sounded at the time like a useful bit of intelligence, the only problem was that I didn't know where the Casanovas were located.
I'd have to think of something else.”

I wish I could say I was afraid, but I wasn't. Quite the contrary. This was by far the most interesting thing that had ever happened to me in my entire life.