Saved Searches Advanced Search
The Alcona County Library is pleased to announce that we will be opening to Phase 3 (50% capacity) in our reopening plan on Monday August 3, 2020. All branches will be open. Harrisville hours will remain Monday-Friday 10:00 am-6:00 pm. Lincoln Hours will remain Monday-Friday 12:00 pm-6:00 pm. Caledonia hours will be Monday-Thursday 1:00 pm-5:30 pm, and Friday 12:00 pm - 4:00 pm with Touchless Pickup Only (winter hours will be in effect October 1-April 30). Mikado Hours will be Monday-Thursday 2;00 pm-6:00 pm, with Touchless Pickup Only. In addition to the cleaning by the cleaning company, staff will sanitize touch points within the building at least twice daily. Before reopening Mikado and Caledonia branches will be sanitized. Soft seating will remain reduced/eliminated. Every other computer will be marked out of service to increase physical distance between patrons. Patrons will be limited to 25 at Harrisville, 10 at Lincoln. Face Masks must be used in buildings per Michigan Executive order 2020-147. Patrons will be asked to don facemasks, and facemasks will be made available to patrons. Full details available at http://library.alcona.lib.mi.us/index.php/programs/277-reopening-plans-p3
Print 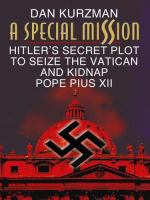 September, 1943. Adolf Hitler is furious that his ally and friend Benito Mussolini has been toppled from power in Italy. He sends German troops into Rome and outlines "a special mission" to SS General Karl Wolff. The mission: to seize the Vatican and kidnap Pope Pius XII. Documentary evidence later reveals that all members of the Curia - and perhaps the pope -were to be assassinated. The first journalist to interview General Wolff on his release from prison, Dan Kurzman tells an extraordinary tale of intrigue and betrayal. Book jacket.
Publisher: Waterville, Me. : Thorndike Press, 2007.
Edition: Large print ed.
ISBN: 9780786298464
0786298464

Canon law forbids sheltering places anyone outside the church establishment without the pope's express approval.

It is impossible for a Catholic to be an anti-Semite: Spiritually all of us are Semites.

The Church's welfare, as the pope perceived it, was his primary priority.

And the Vatican's concern about the communist threat grew stronger even as the Allies urged the pope to stop demonizing Russia and there by weaken the Allied side.

In a letter to the Vatican dated November 14,1923, Pacelli denounced the Nazi movement as an anti-Catholic threat and noted that the cardinal of Munich had condemned Nazi acts against the Jews.

The Jewish problem does not exist in Italy.

Most Italian Jews, like their Catholic counrtymen, found Mussolini and his fascist system acceptable when he came to power in 1922.

Come what may, even if they arrest me one day and send me to a concentration camp, we have no fear. Each one of us has to answer for his deeds one day before God.

There are no comments for this title yet.

There are no ages for this title yet.

There are no summaries for this title yet.