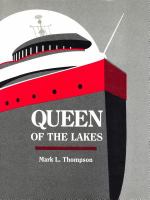 Queen of the Lakes

This book is an account of ships that have borne the name "Queen of the Lakes," an honorary title indicating that, at the time of its launching, a ship is the longest on the Great Lakes. In one of the most comprehensive books ever written on the maritime history of the lakes, Mark Thompson presents a vignette of each of the dozens of ships that has held the title, chronicling the dates the ship sailed, its dimensions, the derivation of its name, its role in the economic development of the region, and its sailing history. Through the stories of the individual ships, Thompson also describes the growth of ship design on the Great Lakes and the changing nature of the shipping industry on the lakes.

The launching of the fist ship on Lake Ontario in 1678 -- the diminutive Frontenac , a small, two-masted vessel of only about ten tons and no more than forty or forty-five feet long -- set in motion an evolutionary process that has continued for more than three hundred years. That ship is the direct ancestor of all the ships that ever have operated on the Great Lakes, from the Str. Onoko , launched in February 1882 and the first ship to bear the name Queen of the Lakes; to the Str. W. D. Rees, which held its title only for a few weeks, to today's Queen, the Tregurtha , the longest ship on the lakes since its launching in 1981.

Although the ships on the Great Lakes may be surpassed in size and efficiency by many of the modern ocean freighters, Thompson notes that the ships now sailing on the great freshwater seas of North America have achieved a level of operating mastery that is unrivaled anywhere in the world, considering the inherent limitations of the Great Lakes system. The Tregurtha reigns as a model of unsurpassed maritime craftsmanship and as heir to a long and glorious tradition of excellence. Every magnificent ship that has borne the title in the past has contributed in some part to the greatness embodied in the Tregurtha . In time, her title as Queen of the Lakes will pass to another monumental freighter that will carry the art and science of shipbuilding and operation to even greater heights.

The name "Queen" is bestowed upon ships that become, at the time of their launching, the longest ship sailing on the Great Lakes. Queen of the Lakes , perfect for coffee tables, lakefront cabins, and boat lovers' bookshelves, tells the story of each of the ships that has been honored with the title.

From the earliest ships launched in the late 1600s; to the "palace steamers" outfitted with stained glass, rare woods, fine carpets, and silk curtains; to today's mammoth ore carriers, Thompson describes each great ship, recalling its dimensions, name derivation, accidents, and sailing history. Ship by ship, era by era, he constructs a chronicle of ship design and the changing role and nature of the shipping industry on the Great Lakes.

Queen of the Lakes is a Great Lake Books publication.

There are no comments for this title yet.

There are no ages for this title yet.

There are no summaries for this title yet.

There are no quotes for this title yet.